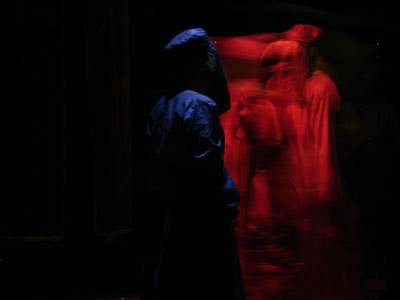 "the piece is so inventive and original that you surrender easily to its infinite possibilities"
The Guardian
A Collaboration:
Sarah Rubidge (choreographer/digital installation artist) and Alistair MacDonald (composer)
with Maggie Moffatt (costumes) Maria Verdicchio and Sébastien Besse (installation environment)
:: developed with the contribution of many participants, in particular Rachel Whitby, Ruth Gibson, Emma Jane McHenry, Susan Worsfold, Sonya Sier and Tracey Altmann, our virtuosic players during the showing at new territories.

Sensuous Geographies is a responsive sound and video environment. It is a space of ritual, a liminal space intended to draw attention both to the intricate inter-weaving pathways of sensation in the body, and to the equally intricate pathways of subtle group behaviour. The installation comprises a collection of polyphonic electroacoustic sound worlds which are created as the actions of visitors to the installation generate and influence both individual musical layers and the overall texture of the sound environment. Shadowy virtual counterparts of the visitors are projected onto banners, intermittently brought to presence by the motion of those engaging with in the installation. The members of the public who become active participants in this responsive environment immediately become an integral part of the installation itself, as they don richly coloured costumes before entering the active space in order that they can be identified as distinct individuals by the motion tracking which drives the interactive system. The visitors' engagement with and immersion in the sound environment results in a continually evolving world of sound, image, light and colour which visitors can alternately observe from without and experience from within.

Sensuous Geographies is intended primarily to be a space for interaction, for contemplation, even for play. It is in a very real sense a performative space, for the users both generate and become an integral part of the environment as they engage with it. When activated the piece exists simultaneously as a durational 'performance' and an immersive installation environment

We are grateful to dancebase in Edinburgh for hosting a residency in September 2002 which allowed us to work on the project.

Sensuous Geographies was made possible by a Creative Scotland Award from the Scottish Arts Council.